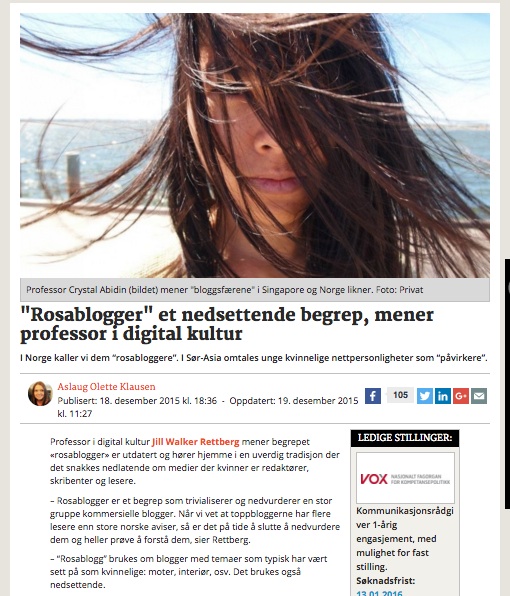 I was recently interviewed by the Norwegian Union of Journalists for their online newspaper, The Journalist, about Influencer commerce in East Asia.

The article also features two of my favourite people: Professor Jill Walker Rettberg, who pioneered research on blogging in Norway, and Masters Candidate Mathilde Aarvold Bakke, with whom I am now analyzing the findings of our study on top bloggers in Norway.

Here is a link to the article. It is Norwegian, so I have taken great faith in Google Translate to reproduce the text in English below.

Many thanks to reporter Aslaug Olette Klausen for the feature.

In Norway we call them “pink bloggers”. In South Asia, it is discussed as young female network personalities as “influencers”.

Professor of Digital Culture Jill Walker Rettberg believes the term “pink blogger” is outdated and belong in an unworthy tradition where it is spoken condescending about media where women are editors, writers and readers.

– Rosa Blogger is a term that trivializes and disparages a large group commercial blogs. When we know that top bloggers have more readers than major Norwegian newspapers, so it’s time to stop disparage them nor try to understand them, says Rettenberg.

– “Rosa Blog” used on blogs with topics that have typically been seen as female, fashion, interior, etc. It is also used derogatory.

Rettenberg says that blogs about fashion, interior, food, family life and handicrafts are common in every country she knows. But what is special about Scandinavia and indeed Southeast Asia is that these are far more commercially successful than other types of blogs.

– In the US, political blogs, news blogs and blogs about technology, television, sports and other as large as what we in Norway have called pink blogger. But in Norway, it is difficult to get on the political blogs that really sets the agenda.

– In countries like Singapore, Thailand and South Korea are young women very influential as bloggers. There are also cosmetic surgery is a hot topic sponsor, and it sounds as if bloggers make even more commercial success than here. But they do not call it pink blogging in Singapore. There is a distinctly Norwegian or weird-Scandinavian term.

She refers to the Australian social anthropologist Crystal Abidin who has just finished writing her doctoral thesis based on fieldwork on young women in Singapore  who use blog, Instagram, Facebook, YouTube and other social media to create itself as a brand and thereby sell ads and get sponsors .

– Affects industry in Singapore is dominated by women. Upwards of 80 percent of influencers are women, compared with between 20-30 percent men. Lifestyle genre is the most mature, compared with Parents blogs, fashion, food, travel and politics, says Abidn.

Although she uses not the term blogger anymore. Primarily because many of them currently use other channels. And the flora of twitter personalities, youtubere and instagrammere is precisely “influencer” or “affect” the most adequate term, she believes.

– I define influencers that regular daily internettbrukre that accumulates a relatively large following mass of blog and social media through a textual or visual narrative about his own life or lifestyle, which engages with followers in digital and physical space and serve it all by integrating “advertiser content” on the blog or post.

– How are they received – both online and offline?

– As stated in the definition, I use “physical” and “digital” room, instead of online / offline, or on / off grid. This is because influencers in Singapore is unique when it comes to having contact with their audience on social media and in face to face meetings. Everything to create a feedback loop of commercial intimacy. I also write about how the intimate relationship between the actuator and the successor iscommercially, interactive, reciprocal and open.

– In Norway, there is a tendency not to take these bloggers seriously, partly because of their “feminine” theme. Did the same thing?

– I think that influencers and their digital property has high impact and influence in East Asia. They are experts at capturing the attention of the audience with disposable income aged 15-35. Even more important is that they play on the sex intimacy by being female influencers with female followers. Påvikerne createsfeminine ideals that they are role models for, and that followers may resemble through purchasing products påvikerne promoters.

Until 2014 was according Abidin entire sphere without appreciable advertising regulation. That’s about to change after a series of controversies. Now there is a poster similar Consumer division counsel submitted for consultation.

Abidin and a Norwegian master student has started studying Norwegian bloggers and how they portray femi nothing. This is in the first place, a textual analysis of blog posts from 20 top bloggers who lay on top 60 in September-October 2014. The Commission is on 19 women and 1 man. The man is naturally not part of the study that has looked at the visual femininity. The bloggers are between 18 and 35 years.

– Much is written about clothing and how to dress up in different situations.There are also written a lot about makeup, and part of body directly. It gives a very impression of how the women should look like; very feminine and well trained, says graduate student in sociology Mathilde Aarvold Bakke.

She emphasizes that the blog is a theme specific genre. That angle and what it actually prints will depend on whether there is a fitness, fashion or mommy blog.In addition, personal differences between bloggers.

– We are in the process of writing the analysis, so everything is not clear yet. But what we see is that they are keen to define what makes a woman to see female out and being such a woman. Kvinnerollen are clearly defined. Then of course the question whether this reflects how bloggers are in reality.

– We’ve seen blog posts, so there is no guarantee that what you see there is what you actually get in reality. It is important to distinguish between the blog and the person behind the blog.

In the preliminary findings, this is also the message of the bloggers themselves.Distinguishing itself from its own blog persona is often an argument used when exposed to criticism from readers, for example, to be superficial.

– One of the bloggers put it, that she is personal blog, but not private. It’s probably a lot of things they do not share there. It also has with what theme you choose to write about. Are You a mammblogger parts you more about your children than if you are a fashion blogger.

She points out that this, however, is not absolute. There are several of bloggers who also show community involvement that are not typical blog.

– It is not always the bloggers get as much attention around these items. It is a very complex genre, and it is perhaps only when one sits down and follow blogs for many months that you learn what they are actually writing about. They have enough demonstrated community involvement earlier, but perhaps it is now, when they have had enough influence, that it gets the attention that they actually do it.

– It is interesting to see people comment on blogs before they actually read them, but a statement on the basis of impressions about what they are writing about.

– Have you seen anything on the extent to which bloggers have influence?

– We have seen bloggers’ blog, not the comments. But one gets an idea when they answer questions from readers. That leaves you with an impression of what the readers ask about. What we see is that the genre is instructive. Bloggers give readers training on how they can do things.

– I think they perceive to be seen and heard. But not always the way they want.Sometimes they participate on their own terms, and participate in debates. Then I think they feel that participating in public debate is power, and that they have influence. But it also happens that they receive unwanted attention on things they have written, that they do not want to be known for.

Bakke also revealed that the majority of bloggers writing between four and five posts daily, in a more or less orderly mix of sponsor-controlled and private media.There is not anyone who is equally good to mark the former, but Bakke still think there are few who are fooled by unbranded advertising poster.

– It is very easy to see what is advertising and what is not. The design of the advertising inserts are very similar. There are product names and links to where you can buy the products. They also writes often that they have received the products in the mail, so they are clear that they did not buy it himself. As a reader, I find it easy to distinguish.

– The blog is still a young genre, and it is under development. The bloggers are trying to find out what is their place in public. But there is yet another challenge to find the balance between the blog as a source to participate in public debate and blog as a marketing channel. I think they are on the right path.